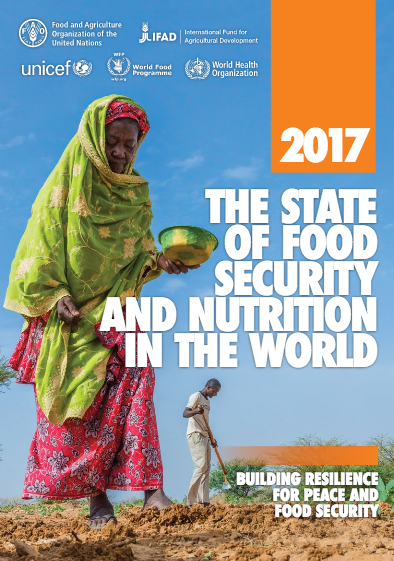 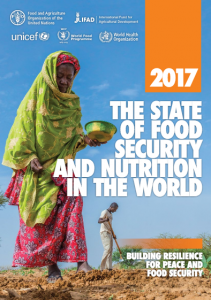 A key worrisome finding of the annual FAO report „The State of Food Security and Nutrition in the World“ is that after a prolonged decline, the most recent estimates indicate that global
hunger increased in 2016 and now affects 815 million people.

Moreover, although still well below levels of a decade ago, the percentage of the global population estimated to be suffering from hunger also increased in 2016. In parts of the world, this recent surge in hunger reached an extreme level, with a famine declared in areas of South Sudan in early 2017 and alerts of high risk of famine issued for northeast Nigeria, Somalia and Yemen.

In 2016, the food security situation deteriorated sharply in parts of sub-Saharan Africa,
South-Eastern Asia and Western Asia. This was most notable in situations of conflict, in
particular where the food security impacts of conflict were compounded by droughts or floods, linked in part to the El Niño phenomenon. However, worsening food security conditions have also been observed in more peaceful settings, especially where economic slowdown has drained foreign exchange and fiscal revenues, affecting both food availability through reduced import capacity and food access through reduced fiscal space to protect poor households against rising domestic food prices.

The rising trend in undernourishment has not yet been reflected in rates of child stunting, which continue to fall. Nonetheless, the world is still home to 155 million stunted children. Levels of child stunting are still unacceptably high in some regions, and if current trends continue, the SDG target on reducing child stunting by 2030 will not be reached. Wasting also continues to threaten the lives of almost 52 million children (8 percent of children under five years of age), while childhood overweight and obesity rates are on the rise in most regions and in all regions for adults – all of which highlights the multiple burden of malnutrition as a cause for serious concern.

The failure to reduce world hunger is closely associated with the increase in conflict and violence in several parts of the world. Part 2 of this year’s report attempts to provide a clearer understanding of the nexus between conflict and food security and nutrition, and to demonstrate why efforts at fighting hunger must go hand-in-hand with those to sustain peace. Over the past decade, conflicts have risen dramatically in number and become more complex and intractable in nature. Some of the highest proportions of food-insecure and malnourished children are found in countries affected by conflict, a situation that is even more alarming in countries characterized by prolonged conflicts and fragile institutions.

This has set off alarm bells we cannot afford to ignore: we will not end hunger and all
forms of malnutrition by 2030 unless we address all the factors that undermine food
security and nutrition. Securing peaceful and inclusive societies is a necessary
condition to that end.

Download the FAO report „The State of Food Security and Nutrition in the World“ here.

IWEThe State of Food Security and Nutrition in the World01.03.2018