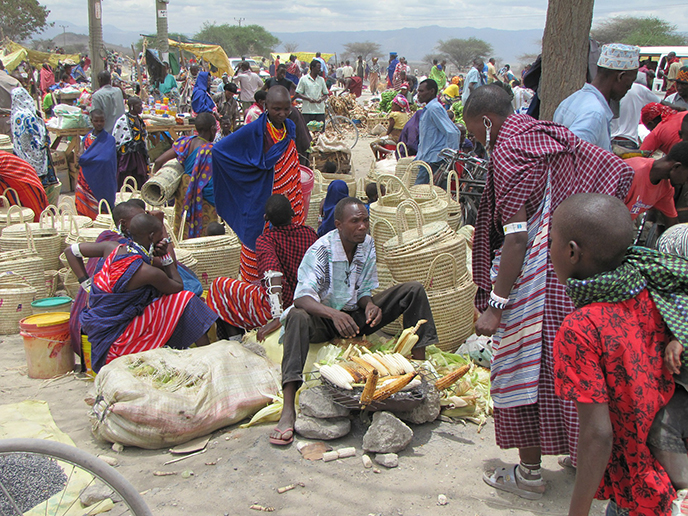 Food insecurity in Africa has a long-term historic dimension that reaches back to at least post-colonial times and subsequently neo-liberal paradigms in the 90ths together with tremendous global market distortions particularly in the agricultural markets and consequently the overall neglect of the agricultural sector by most African governments. In this context, The AU Maputo Declaration 0f 2003 that committed all African Governments to invest by 2008 at least 10% of their budget into the agricultural sector was a important wake up call. As of today, only few African countries have reached that target and even less countries have reached complete food security. The so-called world food crisis of 2007/2008 (which was in reality a global food price crisis) was another alarm call that the African continent has to invest in its food production.

While the in rich countries in the North about 30% of the food produced ends up in the dustbin, in Africa between 30 and 50 per cent of the crops produced are already destroyed in the field or on the way to the final consumer. If post-harvest losses could be controlled, Africa would be self-sufficient in food production. This is where massive investment is required. It is strategic and at the same time the fastest way to generate stable incomes to farmer families, provide jobs for rural youth and help saving foreign exchange of national economies.

What was true in the end of the 20th century, has nowadays become even more relevant: price volatility in the international markets has been significantly increasing over the last 20 years; climate change has started to have significant negative impacts on agricultural production in the continent; regional outbreaks of plant and animal diseases, pests and recently locust attacks have become more frequent and spread wider; and urbanization going along with changing patterns of food consumption generates additional pressure on existing agricultural resources (already today 50 % of all agricultural land in the North is used for meat production)

In the light of the latter, even more investment is required, above all to make agriculture more resilient against the direct and indirect effects of climate change.

With regard to the actual crisis, three major lessons are to be taken. First, sustainable, cost efficient and resilient food systems are regional and only seldomly respect national borders. Secondly, foods producers need regular and sufficient income including the legal/political security that this is protected from extreme price volatilities. Thirdly, instruments and policies that are put in place to fulfill the right to food for the vulnerable population, need to be timely and should not interfere in the food markets.

Therefore, borders need to be open, to allow trade to freely move agricultural products from surplus areas to deficiency areas (against closed borders “starving your neighbor”). However, policy has to make sure that the major share of the value addition flows into the income of the farming population. Compared to intelligent regional trade, national buffer stocks are expensive to hold and difficult to manage. Buffer stocks are not obsolete (see actual locust crisis in East Africa), but they should be organized on regional level and preferably supplied from regional sources. As for policies to guarantee food security for the vulnerable, instruments like school feeding, cash for labor and voucher systems have been proven to be the most cost efficient with the least distorting impact in the markets.

There are two major relevant observations:

First, (and in contradiction to the statement in Point 3 on page 4 of the concept note), the prices for important food crops in the world market have rapidly and significantly dropped to another historical low level. This is particularly true for maize, wheat, palm oil and sugar (the latter not been important for human nutrition), all crops that are also used to produce “bio”-fuels. They follow the rapid decline of prices for fossil energy sources. (The exception is rice due to the fact that the two biggest rice exporting countries in Asia have (as in 2008) closed their borders for export of rice.) In the case of the East African food crisis due to the locust plague, the deterioration of those prices could be – exceptionally – used to quickly acquire sufficient food supplies in the world market for very reasonable costs. However, this should not be an invitation for African governments to reduce again (as in the 80’s and the 90’s) their own efforts in investing in sustainable local agriculture.

Secondly, lock down policies make the implementation of best practice in terms of transfer policies. School feeding becomes impossible when schools are closed, the administration of vouchers and cash-for-work becomes impossible, when public administration is confined. This requires in close cooperation with epidemiologists the development specific intelligent innovative alternatives in order to fulfill the right to food for the vulnerable. As for the lock down of national borders, this will probably in the short term have less negative effects. De facto, most borders can already be considered as technically and even sometimes politically closed. Most likely, existing informal systems and practices are going to persist.

Finally, irrespective of the present crisis, there will be more and perhaps heavier challenges to be mastered while we strive to sustain agricultural production and improve food security in Africa.

Investing in the infrastructure gap and in the abolishment of post-harvest losses remains undebatable.

Today and in the medium term there will be relatively little employment opportunities for the majority of rural youth and women outside the agricultural sector including the production of basic inputs and services for the sector as well as processing and transformation of agricultural products for local, national and regional markets. In addition to that, more than anywhere else in the world, African farmers are price takers including all constraints and disadvantages that this implies. Many farming families still live under more or less precarious subsistence conditions confronted with an increasing economic concentration in all segments upstream and downstream along the value chain.

The AU, RECs, African governments, and in support by the AfDB have to intensify their policy work to protect African farmers from the negative effects of market concentration in global and domestic markets. This requires 1) a regulative framework at the pan African level to protect producers and local economies from capital drain due to globally acting oligo- and monopolies as well as 2)  sound regional integration policies including 3) a conducive and supportive infrastructure up to 4) focused financing tools for young (innovative) entrepreneurs and women entrepreneurs in rural areas. These priorities are directly and indirectly anchored in the High 5s of the Bank and should be maintained and intensified.

Another domain of growing importance is the field of adapted agricultural research to cope with the impact of climate change, develop more sustainable and natural resource friendly agricultural production systems including the potential of indigenous crops and animal species.

Important priorities for the improvement of the institutional side are 1) pro-active land policies that legally secure the access to land, in particular for women, 2) creation of legal frameworks and promotion of agricultural  and rural cooperatives, 3) investment in client-oriented extension systems that closely link research and rural practice, 4) develop curricular at all levels of primary and higher education that support the professionalization of rural métiers and reflect the needs of modern agricultural production and of an evolving rural economy, and 5) provide “affirmative” rural finance for youth and women entrepreneurs.